With a wealth of things to see and do, and many places to visit, you’ll have great fun exploring the Isle of Man – the hardest decision you’ll have to make is how to fit everything in!

Discover more than 100,000 years of Manx history and step back in time as you journey around some of the Island’s most important heritage sites, ancient monuments and museums.

Follow the Story of Mann trail which will guide you around ancient castles, forts and sites of religious and political importance as well as burial grounds and Neolithic chambered tombs left by the Vikings and Celts.

The Island has 17 national glens, many of which lead to the sea, and a number of excellently maintained parks and gardens which are perfect for a family day out.

A bit about Port Erin 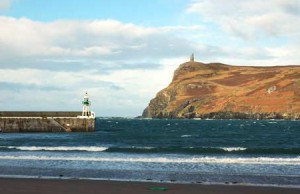 Combining beach, country-side and our own unique history is a Manx specialty. The beach at Port Erin is perfect for families, with safe, golden sands and rocky inlets set against a backdrop of the beautiful Bradda Head.

Fishermen and divers are both attracted by its clear water and rich marine life. The coastal footpath to picturesque Port St Mary and the path north to Fleshwick bay and beyond are outstanding with fine cliffs, sea stacks and breathtaking panoramas opening up at every turn in the path.

To further appreciate this lovely coastline and its wildlife, a boat trip to the Calf of Man is a must. The Calf of Man is particularly interesting as it is an observation point for a wide variety of breeding and migrating birds. It is also a home to the Chough, a flock of rare Manx four-horned Loughtan sheep and a large seal colony. The open-air folk village Cregneash is just a slight detour from the coastal footpath, giving you an ideal excuse for a cup of tea while you go back in time to the 19th century when fishing and crofting were the mainstays for communities like this.

From Cregneish take a walk down to the Sound, one of the most picturesque points in the south of the island from which you can view the Calf of Man, a smaller island directly opposite. The swirling tidal races are popular with adventurous kayakers and there is a bird sanctuary located there which can be visited only by boat from Port Erin or Port St Mary. 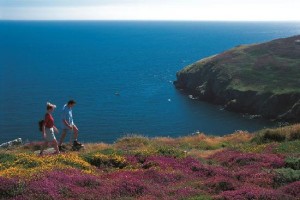 Walking the Isle of Man

These waters are full of wildlife, a hotspot for seals who sunbathe on the rocks, and passing dolphins and basking sharks.

Walkers will love the coastal footpaths from here leading to Port Erin, Spanish Head, Cregneish and the Chasms in Port St Mary. Meayll Circle stands near to the summit of Meayll Hill overlooking the south of the Island and provides evidence of occupation from Neolithic to Medieval times.

Port Erin is also home to the renowned Erin Arts Centre; an excellent venue for exhibitions, music and plays.

Port Erin is such a convenient place on the island, as we are just a 10-minute drive from the airport and there is so much to explore in and around Port Erin using Maycroft B&B as your base.